At the GEAR show in the beginning of June, Justa Skipin Miracle, ridden by Faye Strickler, finished his last few points to win his Non-Pro Supreme Champion Horse Award.

This is a lifetime award given by the Appaloosa Horse Club to a horse that has earned at least 100 points. At least 30 of the points must be earned in halter classes and at least 70 in performance classes. No more than 10 points from one performance class will count and the horse must also have at least one Register of Merit in a class in each of the three performance class categories.

The Non-Pro Supreme Champion Horse award is a great achievement and no easy task. The achievement is even more remarkable given Justa Skipin Miracle’s (Rudy) history. We caught up with Faye to share Rudy’s story.

Faye owned Rudy’s dame, Justa Misty Image. She wanted one more breeding before she became too old, and Faye decided on Skipa Maxi Treat. She really liked the stud as he was a good mover with good manners.

Her mare’s pregnancy was uneventful, and Faye was excited to soon have a baby at the farm.

The morning that Rudy was born, Faye’s daughter, Morgan woke her up. She checked the monitor and saw legs sticking out of her mare. She went to the barn and saw legs and no nose. She immediately called her veterinarian who told her to palpate the mare to see if she could feel the foal’s head. Given that her mare was 16.2 this was not an easy task.

Faye said this was scary moment as she felt no head. Her vet told her to immediately get to the emergency hospital.

Faye loaded her mare up, put her daughter in her car seat, and put the mare in the trailer with Rudy’s legs sticking out. She said she called the local sheriff to tell them she had an emergency and not to pull her over. Faye knew this was not going to end well.

When she got to the emergency vet, they techs and vets were opening the trailer before she even was at a full stop. They palpated the mare again and luckily the trailer ride pushed Rudy’s legs back enough to release his head. The mare was given some medication and Rudy dropped out, literally with the mare standing.

The attending veterinarian pronounced Rudy dead but one of the techs saw that he was breathing. They started to roll him back and forth and asked Faye if she wanted to save him. Her answer was a resounding YES! They gave him a medication to preserve his brain function and then all they could do was wait.

Rudy was unable to stand or nurse.

He was not aware of his surroundings. He was technically a dummy baby.

Every day they tried to get him to stand, and it took almost two weeks before Rudy could stand up with assistance.

Rudy spent a few weeks at the hospital and then was on to a surgeon. The tendons and ligaments of his front legs had shrunk causing his knees to knock together and he was urinating where his umbilical cord had been.

Faye stopped at the racetrack on the way home to see Dr. Harrison to determine if the legs were fixable. He had surgery, recovered well and has straight legs now!

Having a “dummy” baby meant that Faye had to do things a little differently with Rudy. She said they treated him as normal but not normal. Though he was getting stronger on a daily basis, his ability to learn was diminished. He needed a lot of repetition to learn to do anything.

Faye started to ride Rudy at 2. In the beginning, it did not go very well.

Due to his early life experience, he had some coordination issues. He could walk and trot, but the canter eluded him, so they just trail rode for a while.

Rudy has no flight response but hates to be yelled at.

When Rudy was 5 years old, Faye decided to make him a show horse.

Faye sent him off to a trainer.

She said this did not go well as the trainer had no experience working with dummy babies.

He came home a dangerous horse. When she would ask him to do something he would rear, a behavior he had never done before.

The rearing became a concern for her and for her partner, Dean, who wanted her to stop riding him alone. Faye didn’t listen and continued to ride Rudy. The rearing stopped one day when he reared and fell over on top of her.

She stated that she thinks he scared himself and after that he never reared again.

With all the trials and tribulations of training a dummy baby behind her, Faye and Rudy have amassed a very impressive show record.

In addition to Appaloosa events, Faye and her daughter Morgan, showed Rudy at the Palomino World show several times where he was Reserve Champion in Youth Color, Hunter in Hand, Hunter Hack, Road Hack, and Hunt Seat Equitation. Morgan has also showed Rudy successfully in the Virginia 4-H program.

Faye has taken Rudy to the Appaloosa Nationals as well where she earned her first top ten ribbons.

For her, those ribbons are the best she has ever received given all of the issues Rudy started with and the hard work she put into training him.

In 2021, with only a few points left to achieve his Non-Pro Supreme Champion Horse award, Rudy tore his rear suspensory ligament.

This landed him with a year of rest, the first three months being stall rest.

He moved to hand grazing and was able to be ridden at a walk in September of last year. He started trotting again in February of this year and cantering in March. Rudy returned to the show pen in May and finished his award in June.

It Takes a Village

Faye stated she has a lot of people who she is thankful for and who have supported her along the way.

She recalls Connie Burchett asking her “Are you going to ride that?”

To which Faye responded, “Yup, I’m going to make it happen!”

She thanks Ray and Connie Burchett for endless help with Rudy along the way and for always supporting her. She also thanks Dean, her other half, and her daughter Morgan, for always encouraging her to keep going.

Faye said that most people have no idea how hard it is to work with a dummy baby until they have experienced it themselves. It is a challenge.

For Faye the best part of this award is proving that with determination, even with a horse with disabilities, achieving great things is possible.

As for Rudy, he’s probably just happy to never have to run Keyhole again!

The Heritage Class is unique to the Appaloosa among the stock breeds. The Appaloosa’s history with the Nez Perce Tribe (Nimiipuu people) means that many entries in this class honor that heritage with Native American regalia. 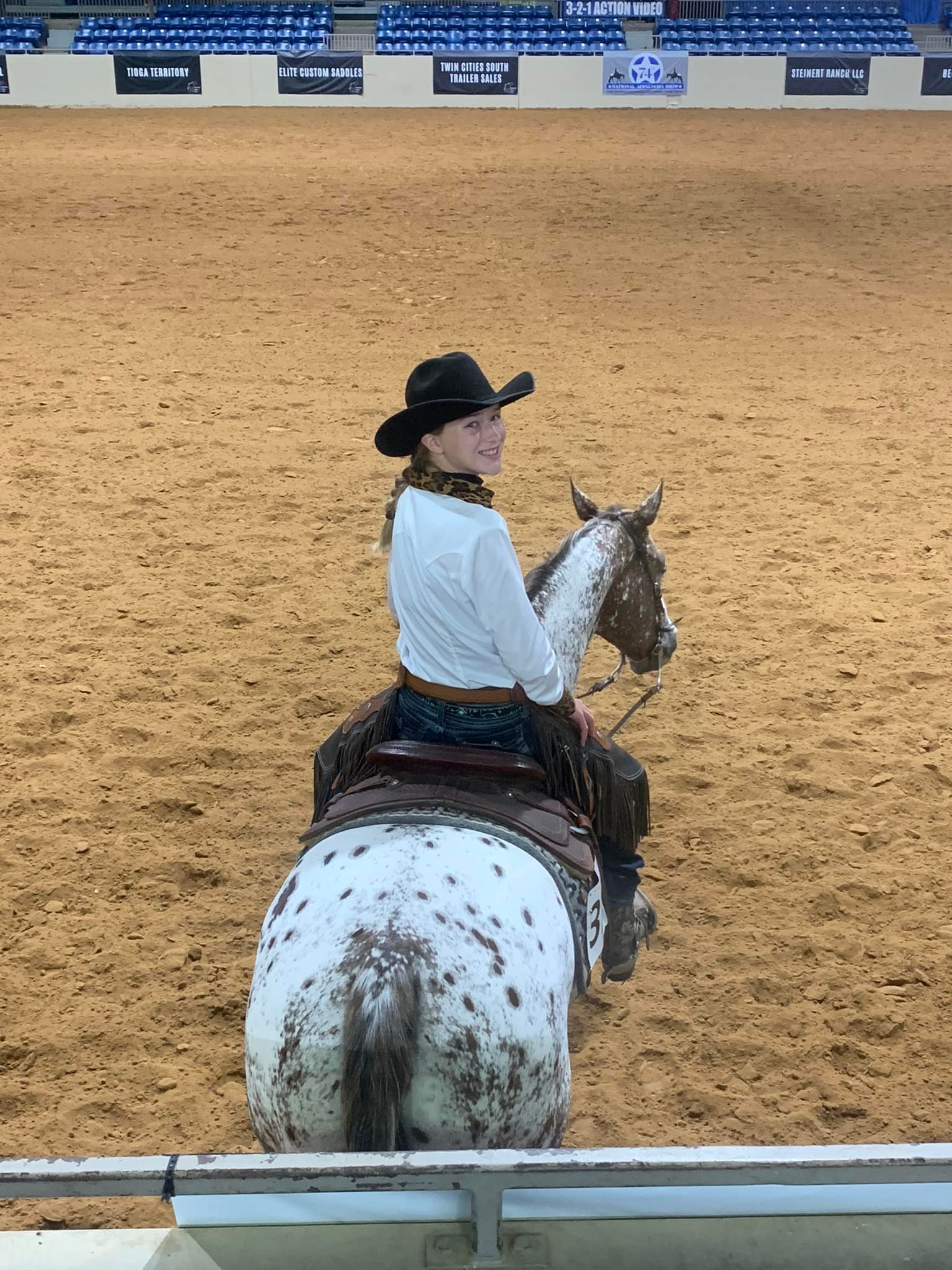 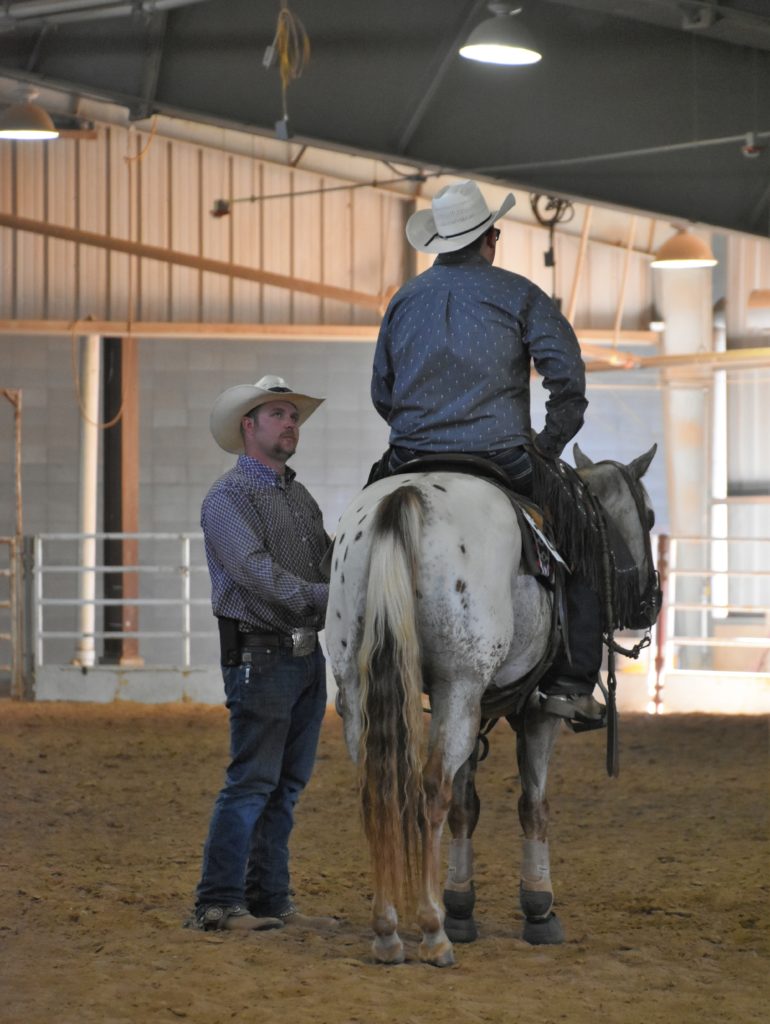 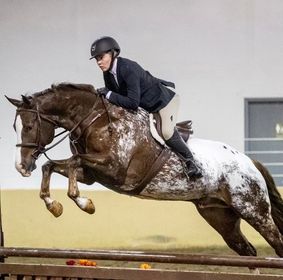